FromSoftware has done a remarkable job by adding a great number of tough enemies in Elden Ring. These enemies come in different shapes and sizes. Some can be taken down easily, while others will make you go through hell. The most formidable enemies are the Bosses that you can find throughout the map. And today, we are going to write down an Elden Ring Dragonlord Placidusax location guide, through which you’ll be able to find this hidden Boss.

Bosses in Elden Ring are unique and all of them have their own tricks to use in combat. In our Elden Ring Bosses tier list, we ranked all of them from best to worst. The important thing to keep in mind is that you don’t have to fight all Bosses to complete the story. Some of them are optional, and you can avoid them if you’re not a huge fan of Boss fights. But if you are, then it is important to know about Dragonlord Placidusax’s location.

Dragonlord Placidusax is easily one of the best Bosses to fight in Elden Ring. This one isn’t like the other Dragons that you encounter in the game, as it’s more powerful and has better attacks in its arsenal. If you think that you’ll be able to take it down quickly and easily, then you’re wrong. Furthermore, while killing it is challenging, finding Dragonlord Placidusax is also pretty difficult.

There aren’t any NPCs or quests that are going to lead you to Dragonlord Placidusax’s location. It is a secret Boss and you’ll have to find him all on your own. Furthermore, you will need to make significant progress through the game before you can fight him, as the location where this powerful beast resides can’t be accessed until the game’s later stages. To help you reach Dragonlord Placidusax location in Elden Ring, we are going to talk about everything you must do before you can fight this Boss.

Go To The Mountaintops of the Giants

The first thing you need to do is make your way to the Mountaintops of the Giants. You will reach this location after visiting the Capital city of Leyndell. Now, the thing about this place is that since it’s an area you visit in the very-late game, it’s crawling with powerful enemies. The Mountaintops of the Giants serve as a home to some of the most forbiddable enemies, and they aren’t easy to take down.

You’ll eventually come across the Fire Giant as you further explore the area. This is a Boss you’ll need to take down to further progress through the story. Taking it down isn’t an easy task as it has a lot of HP. To make things worse, it has two phases. Also, if you find this boss challenging, then you can read our Elden Ring Fire Giant Cheese method guide and beat this boss easily.

After eliminating the Fire Giant Boss, you’ll get the luxury to cross the Frozen Chain Bridge. This bridge will help you enter the Forge of the Giants, a key location to reaching the Dragonlord Placidusax location in Elden Ring.

Travel to The Forge of the Giants

Unlike the Mountaintops of the Giants, you don’t have to worry about fighting powerful enemies at the Forge of the Giants. The place has no enemies for you to fight, and you won’t even find loot here. It’s an empty place where players often get confused regarding what to do next.

If you have managed to reach the Forge of the Giants, make your way to the left side of the ring, where you’ll be able to find a Site of Grace. After you interact with it, you will see a new option in the list named “Talk to Melina”. Click on it to engage in a conversation with her. At the end of the conversation, you will need to choose from two options; “I’m ready.” and “I’ll like you to wait.”

If you choose the first option, you will enter the Crumbling Farum Azula, the place where you’ll find the Dragonlord Placidusax. However, if you feel you’re not properly equipped to take down the powerful Dragon, you can choose the second option. You can head back to some other place to grind for some more runes and upgrade your stuff by using it. You can check out our guide on how you can farm runes quickly in Elden Ring.

After you have made the necessary upgrades and have equipped the right ranged weapons or melee armaments such as some of the best strength weapons, it’s time to return to the Forge of the Giants Site of Grace and talk to Melina again. If you’re ready, select the first option, and you’ll get teleported to the Crumbling Farum Azula.

The final part of our Elden Ring Dragonlord Placidusax location guide is progressing through Azula. The Crumbling Farum Azula is home to some of the most difficult enemies that you’ll find in Elden Ring, including the Dragonlord Placidusax. Once you have reached the place, you will need to keep making your way forward until you come across the Beside the Great Bridge Site of Grace. This Site of Grace is near to where Black Blade Maliketh is, another extremely powerful Boss.

Where To Find the Dragonlord Placidusax

From the Beside the Great Bridge Site of Grace, turn around and you’ll be able to use an elevator to go down. Then, go right and keep on going forward until you come out of the building. Do not fight any enemies while you’re going outside the building, as you’ll only waste your time this way. Once outside, go forward to the cliff and move along its edge until you see a rock ledge.

Jump down from it, and then keep making your way forward until you reach the broken wall of a colosseum. Here, you’ll see an option to “Lie Down.” Doing so will start a cutscene, after which you’ll reach the location of Dragon Placidusax. Just by looking at him, you’ll be able to tell that it will not go down so easily.

How To Defeat the Dragonlord Placidusax

Even though the Dragonlord Placidusax in Elden Ring is huge in size, it is still quick. To defeat it, you first need to learn about its attack patterns.

To begin with, the Dragonlord Placidusax is capable of calling down lightning strikes from the sky to your location. These can drain a lot of your health, so you need to dodge them as quickly as possible. The area where the lightning strike is about to hit first gets covered in red sparks, so you’ll be able to tell the exact location of the strike thanks to them.

Being a Dragon, the Dragonlord Placidusax can breathe fire towards you from both its heads. The Boss can also fly in the air and then land on you to deal damage, so keep your sight on it when it’s in the air. These attacks are easy to avoid, and you won’t have difficulty dealing with them. But after you drain some of its health, the Dragonlord Placidusax will start using new attacks.

After a while, the Dragonlord Placidusax will start using attacks such as vanishing into the air and diving towards you from black thunderclouds. Furthermore, it will also vanish and then appear right next to you. The Dragon can also use a huge staff to slam the ground and cause damage to you. When its health drops below 50%, the Dragonlord Placidusax will use another new attack through which it will call down lightning strikes before disappearing into thin air. He will then come towards you quickly and perform a slash attack, after which he will breathe fire towards you.

As you can see for yourself, the Dragonlord Placidusax is the kind of Boss that will use a variety of attacks against you. In the beginning, its attack won’t seem that powerful, and you’ll think that you can take down this Boss easily. But after a while, it will start using attacks that will be hard to dodge. Therefore, you will need to be quick in movement and constantly dodge the attacks until you find an opening to land an attack on it. The Dragon will also throw rocks at you if you’re a little away from it and will perform a sweep attack with its tail if you’re too close to it.

It would be best if you first stay at a safe distance from the Dragonlord Placidusax to see how it attacks. After you learn its patterns, you should then proceed to attack it. This will take some time, and you will get killed a lot of times while learning its patterns. But it would be best if you took the time to observe everything, as it is pretty difficult to take it down without it.

Best Ash of War To Use Against Dragonlord Placidusax

While you will need to use some of the strongest weapons against this Boss, it is also recommended that you get a powerful Ash of War. For instance, if you want something that can help you drain a lot of your enemy’s health quickly, you can use the Hoarfrost Stomp Ash of War. If you’ve been watching Elden Ring speed runs on YouTube, you might have noticed that this Ash of War has been used a lot in them. If you want something that can help you dodge the attacks of the Dragonlord Placidusax quickly, then you can try the Bloodhound’s Step, which is one of the best Ashes of War in Elden Ring.

In any case, reaching Dragonlord Placidusax location in Elden Ring is a pretty difficult task, and it is even more difficult to take it down. But if you have the right weapons and Ashes of War in your arsenal, then you’ll be able to kill it easily. You can also use some of the best Spells against it. You can check out our Elden Ring Spells tier list to select the best ones.

This marks the end of our Elden Ring Dragonlord Placidusax location guide. We hope you’ll be able to easily reach the location of this powerful Boss through our guide. 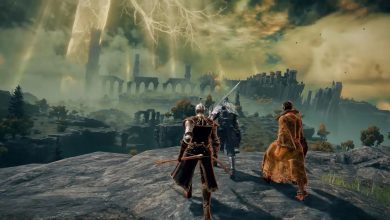