FromSoftware games have defined a whole genre of gaming with their immensely difficult boss fights and tough-to-navigate environments. Their latest installment, Elden Ring, is no different, with its plethora of spirit-breaking bosses, enemies, and dynamic builds that are sure to put you in an inferiority complex. In addition to the main bosses, optional bosses have always been known to present significant challenges in FromSoft games. One such optional boss is Alecto, Black Knife Ringleader, a powerful foe that’s giving many players a run for their money. As always, we’ve compiled Elden Ring Alecto Black Knife Cheese methods that would help you fare better against this enemy and achieve victory.

Unlike huge bosses like the Fire Giant, Alecto is agile, and incredibly fast; her attacks are strong and do a lot of damage. Players are recommended to follow one of the cheese methods for Alecto, Black Knife given below. You can even try them all one by one to see which one works best for you. Let’s get straight into it.

As you might already know, Alecto can be very fast, and the status effects that she puts on you don’t help with the fight either. But due to her speed, she is susceptible to heavy attacks that can easily stagger her. You would want to use any strength weapon or best weapon of your choice, preferably something that guarantees that your opponent will be staggered. You’ll have to time your attacks so that you strike her at the right moment, and this can even stop her from performing some of her signature one-shot moves that would otherwise inflict a devastating amount of damage.

However, there are certain moves that you cannot interrupt after a certain time, so you’ll have to dodge them. Whenever you see her performing a jump, do not hesitate to run. She can make two types of jump attacks; generally, the first one would stagger you, and she will probably follow up with another. The second type is an extremely powerful Bloodflame AoE attack, which you can also use to make a Darth Maul build. Anyways, using this incantation would do a great deal of damage to your health, so dodging is the best course of action.

The best strategy here is to use a trusted heavy weapon such as a Greatsword and perform heavy jumping attacks on her. This will significantly affect her poise and ultimately open up the possibility of a backstab attack. Moreover, you can always backstab her after she makes her jump attack, be sure to dodge it first, though. With a bit of practice, you’ll be able to bring the black knife ringleader down in no time.

Our second Elden Ring Alecto Black Knife Cheese strategy is based on a probable glitch in the game’s AI. Generally, Alecto will be traversing the area with great speed and swift actions, however, you could try cornering her towards the rocky edge of the battlefield, and she will become much slower than usual. You will have to completely corner her over the edge for this to work. You have to start attacking her after she’s near the edge so that stun damage is inflicted and her poise breaks.

You could use a strong heavy weapon for this purpose, however, we have found that equipping ash of war such as the Carian Grandeur does wonders with this strategy. We tried spamming Carian Grandeur on her and she was left almost unable to attack. When her poise breaks, you can also do a visceral attack and do some more damage. Some other great spells, especially melee types, can also be used here.

So far, this has been one of the easiest and most surprising methods to cheese this boss. It will probably take a few tries before you’ll actually be successful in luring her to the corner but it’s all worth it in the end.

Use the Briar Armor Set

Even though the methods we’ve mentioned so far should be enough to deal with this enemy, there are many alternative ways with you can cheese Alecto black knife. One such method is by use of the Briar armor. If you already possess this armor set, you would know that rolling into enemies with it causes damage to them. But with this particular boss, the armor seems to interrupt almost everything that she throws at us.

The boss fight becomes relatively very easy if you have the briar set equipped. The fact that Alecto has very low poise also plays significantly into this strategy. Overall, we observed that the Briar armor was highly effective against this boss and might also work for bosses of similar nature.

Getting your hands on the Briar armor is not easy, to say the least. In order to acquire the armor, you will first have to face Elemer of the Briar, the boss in Shaded Castle in Altus Plateau.

Elemer is quite the aggressive enemy and may take a lot of effort to beat. Only after you’ve defeated Elemer, can you buy the whole Armor set from the Palm Reader in Roundtable Hold.

The armor inflicts damage when you dodge roll into your enemies, the damage increases with the number of armor pieces worn. It is one of the many great armors available in the game.

And that sums up our Elden Ring Alecto Black Knife Cheese strategy guide. This boss could be a bit difficult to work with at first, but with persistent effort and constant help from our guide, you’ll be sure to overcome it without knocking yourself over in pain.

Who is Alecto, Black Knife Ringleader 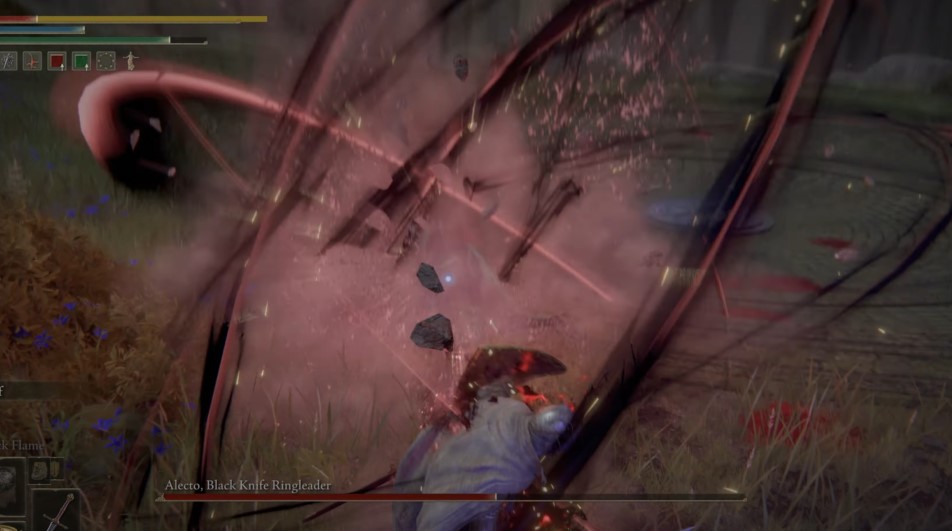 Alecto, Black knife ringleader, is a remarkably agile and highly aggressive warrior that is immune to almost all status effects. Therefore, you cannot inflict her with anything that could potentially lower her health over time. She is one of the many Evergaol bosses that you will encounter within Elden Ring. Evergaols are arenas where you can fight different variants of some of the other bosses you might have fought previously in the game. In such types of fights, you cannot bring any NPC or Spirit Ashes to fight alongside you in battle.

Alecto’s speed and agility make up for what she lacks in poise. She has a powerful grab attack that could catch you off guard and deal an immense amount of damage. Her most formidable move is when she imbues her blade with a dark flame while jumping to perform a powerful overhead strike. Upon impact, her blade creates an explosion of energy that could one-shot you and has a devastating DoT effect.

She can be a very daunting enemy to deal with but is optional to fight. However, beating her comes with great rewards as you get 80,000 Runes and Black Knife Tiche; one of the best Ashen Remains in Elden Ring. Equip Golden Scarab Talisman before the fight and you can get more runes.

You can come face to face with this formidable opponent at the Ringerleader’s Evergaol at the Moonlight Altar Plateau, located in the southwest of the Liurnia of the lakes map region. You can only access the Moonlight Altar after you have made a significant amount of progress in Ranni’s questline. You should have already beaten Astel, Naturalborn of the void, and gained access to the Deep Ainsel Well lift, which you can use to go up to the plateau.

You just have to move down the cliffs in the northwest direction from the Moonlight Altar site of grace to access the Ringleader’s Evergaol.

We really hope that our Elden Ring Alecto Black Knife Ringleader Cheese guide works for you, as they have for us. Let us know in the comments if you happen to come across some more fun ways you can beat this boss.